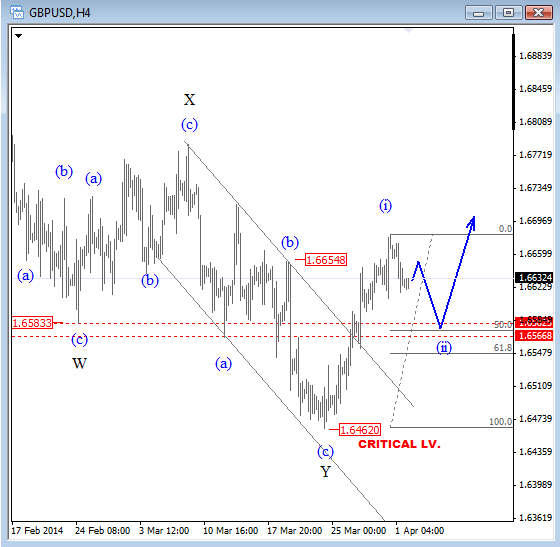 GBPUSD found the support last week and recovered nicely above the upper trend line of a downward channel. A reversal from the low can be counted in five waves on the intraday charts, so we suspect that trend has changed and that pound will continue to the upside, especially after a corrective retracement back to 1.6550/70 that could unfold in the next few sessions.
Posted by Unknown at 03:13 No comments: Crude oil has broken above the psychologically-significant $100 handle following some positive US economic data overnight, leaving the door open to further gains on an upside surprise to upcoming US revised GDP figures. Meanwhile, goldmay be vulnerable to further declines following a brief dip below the $1,300 mark overnight as ebbing geopolitical risks sap safe-haven demand for the precious metals.

Crude Cracks $100
Crude oil came out of the gates to a strong start in US trading overnight and continued to edge higher following a better-than-anticipated US Durable Goods Orders reading. Despite a soft inventories report from the DOE and a dip in US equities, the bulls managed to hold onto control of price direction to push the WTI contract above the $100 per barrel mark.

Positive US economic data generally bodes well for the WTI contract given the commodity’s growth-sensitive standing. Thus there is the potential for continued gains for crude oil if upcoming US revised GDP figures and initial jobless claimsdata offer upside surprises.

Gold and Silver Slip Further
Following a brief respite in Asian trading yesterday the precious metals resumed their declines during the US session. Curiously, the falls occurred alongside a weaker greenback which suggests that ebbing safe-haven demand for the commodities was the likely driver, rather than broad US dollar strength. Gold and silver have suffered as easinggeopolitical tensions in Eastern Europe cause traders to unwind fear-driven positions in the precious metals. A further abating of concerns in the region would likely continue to weigh on the gold price and prompt another dip below the $1,300 handle.
Posted by Unknown at 06:15 No comments:

- Australian economic data is near its apex for 2014.
- The Reserve Bank of Australia wants a weaker currency, doesn’t mean they’ll get it.
- Aussie looks to bottom versus British Pound, Euro, and US Dollar.

The Australian Dollar (AUD) was easily one of the most disliked currencies headed into 2014, after a significantly disappointing performance from April 2014 and forward, including the AUD/USD pair. As many analysts (including this one) sharpened their knives for another dismal performance by the Aussie in 2014, something funny happened: the fundamental conditions present for Australian Dollar weakness disappeared faster than most expected.

The Australian Dollar’s underperformance through the end of last year can be best explained two-fold: first, concern that a slowing Chinese economy alongside failure by the Australian economy to rebalance away from its mining activities would create significant damage; and two, the drawdown in the Federal Reserve’s QE3 stimulus program would dampen the demand for the carry trade.

While the Chinese economy may be slowing (as seen by the recent HSBC PMI Manufacturing report), economic data out of Australia has been roundly better than expected. The Citi Economic Surprise Index was holding up at +49.7 by March 24, just off the yearly high seen on March 13 at +50.6. Considering where this economic data-sentiment index was in mid-January at -19.0, it’s evident that domestically, the Australian economy is performing much better than anticipated.

One of the areas analysts were most concerned with – the labor market – has had a much stronger start to 2014 than recent trends would indicate. At +47.3K net jobs growth in February, the Australian economy added the most jobs since March 2012. This figure was well-above the 3-, 6-, and 12-month jobs averages of +13.7K, +10.7K, and +5.3K; in fact, with the short-term averages above the longer-term ones, it seems the Australian labor market is gaining momentum.

The recent shift if the fundamental factors underpinning the Australian economy may be offering a veritable turning point in the Australian Dollar more specifically, especially against the Euro and the US Dollar.
The AUD/USD’s recent ascending triangle formation resolved itself to the upside the past two days, and a longer-term inverse head and shoulders bottoming pattern may be the long-term play. Several former levels that proved as resistance in months (.9085, 0.9140, 0.9165/70) past have been broken, showing that the supply of sellers at these levels have been fully neutralized – the path of least resistance may now be here. 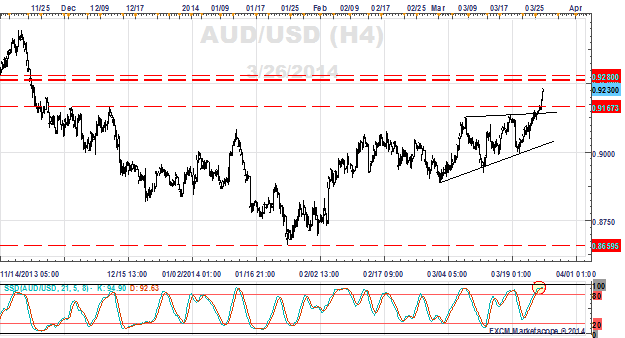 Gold has been given a reprieve in recent trading as it wavers around the $1,310 level, which follows on from Monday’s dramatic decline of over $26. Meanwhile copper has rebounded back to the key $3.00 handle with newswires attributing the bounce to speculation over fresh stimulus from Chinese policy officials. An upside surprise to US Durable Durable Goods orders data due in the session ahead may bolster demand for growth-sensitive commodities like copper. However, WTI may struggle to break the $100 handle on the back of another weak inventoriesreport.

Gold Bears Letup As Prices Stabilise
There are signs of stabilisation for the precious metals space in Asian trading today as the gold bears pause following a collapse in prices earlier in the week. Easing Ukrainian tensions and hawkish comments from Fed chair Janet Yellen have sapped demand for the fiat-money alternative over the past two weeks as shown in the chart below. 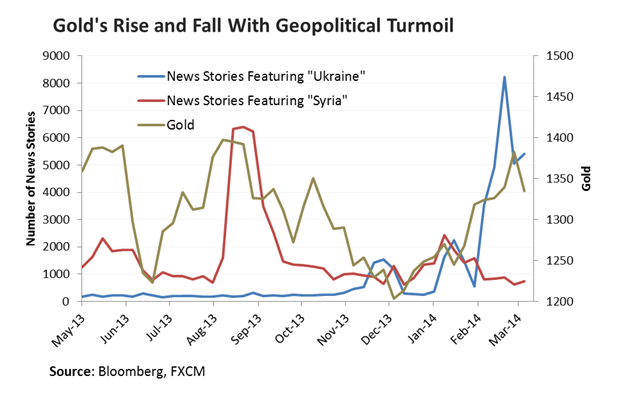 Want to trade with proprietary strategies developed by FXCM? Find out how here.

The Euro fell about thirty pips against the US Dollar, as European Central Bank member Makuch said the bank is preparing measures to avoid a deflation environment. Following the near 5 cent gain in the value of the Euro in terms of US Dollars since the beginning of February, Makuch said that he sees potential for a weaker Euro. Additionally, Makuch said he would not oppose quantitative easing, which would be an unprecedented action for the ECB.

Makuch’s comments reinforced Draghi’s statement earlier this month that Euro gains are increasing relevant to price stability and the ECB will counter any material risk to inflation expectations. Any further accommodative action from the ECB to fight low inflation could drive the Euro lower.
That’s why the Euro declined following Makuch’s dovish comments, and EUR/USD may next find support by the 2-week low at 1.3749. 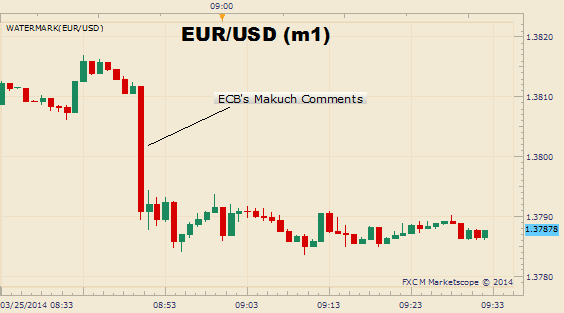 Why AUD/USD may be a long term buy

Australia bears … look away now … you’re not gonna like this …

A new study by Deloitte identifies 25 sectoral hotspots with the biggest potential to contribute to Australia’s prosperity over the next 20 years.
Of these 25, the five key sectors are gas, agribusiness, tourism, international education and wealth management.
It ain’t all roses, of course.
Posted by Unknown at 03:52 No comments: